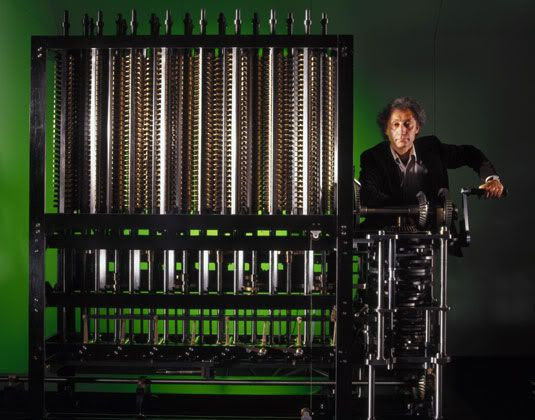 An English mathematician named Charles Babbage conceived and designed a mechanical calculator in the 1820s and halfway through the production of the parts, a disagreement halted the project.

From the article at Smithsonian.com:

The plans looked good on paper, but Babbage was never able to build his machine. More than a century after his death in 1871, computer historians blew the dust off his 5,000 pages of notes and drawings and wondered if his ideas could work. In 1991, on the bicentennial of Babbage’s birth, the Science Museum in London unveiled his Difference Engine No. 2, a fully functioning calculating machine, built to the specs of the inventor’s drawings. A full-scale clone of that machine is now on display in Mountain View, California, at the Computer History Museum through December 2009.

There's a video there you can watch. Very interesting.
(Smithsonian article)
There's one in London, and the one in California, and I think those are the only two.

The Science Museum in London says this on their site:

Difference Engine No 2 designed from 1847-1849 by British computing pioneer Charles Babbage (1791-1871), which excludes printing mechanism. Size 2.1m high, 3.4m long, 0.5m wide. The engine was built by the Science Museum and the main part was completed in June 1991 for the bicentennial year of Babbage's birth. The printing mechanism was completed in 2000. Doron Swade, senior curator of computing and IT, oversaw its construction. Babbage conceived the engine to calculate a series of numerical values and automatically print the results. Difference Engine No 2 was never constructed in his lifetime.

The history of computers is fresh in my mind because of the local display at the New Mexico Museum of Natural History and Science. It's called StartUp: Albuquerque and the Personal Computer Revolution

Babbage's machine would've belonged to England, or something, if it had been finished, so I'm not suggesting it's "a personal computer," though if you read those articles, it seems that one of the two is owned by an individual.

Posted by Sandra Dodd at 5:07 PM No comments:

This photo arrived yesterday in part of an illustration of why a certain home/property in England is called "Longfields." When Cathy, in Hampshire, ordered a copy of Moving a Puddle and some Thinking Sticks, I included a comment that I loved the name of her house and so she sent photos of the fields, and the five horses they have.

The day this arrived, the Lyrics Game word was horse. I had fully planned to add this image there then, but the day overwhelmed me and I didn't get to it. I wanted to make a bigger deal of the fact that the day after I had done an image search for good horse photos, this came and it's better than all of them. And these horses are owned by a family which now has a set of Thinking Sticks. I'm going to England this summer. I'm half thinking of asking for an invitation to visit, and half afraid if I add more visits I'll just never come home.

Longfields, named because, well... the fields stretch out a long way behind the house. 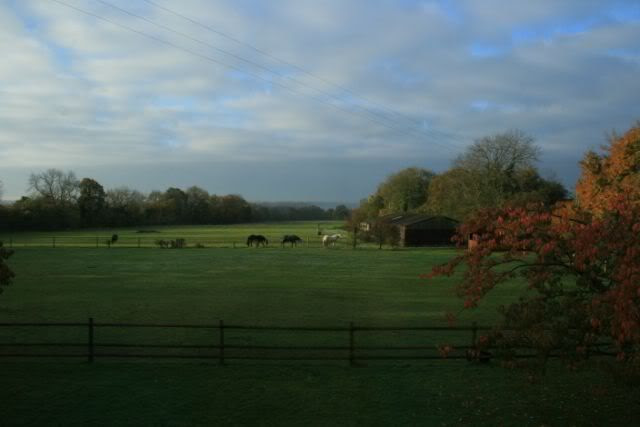