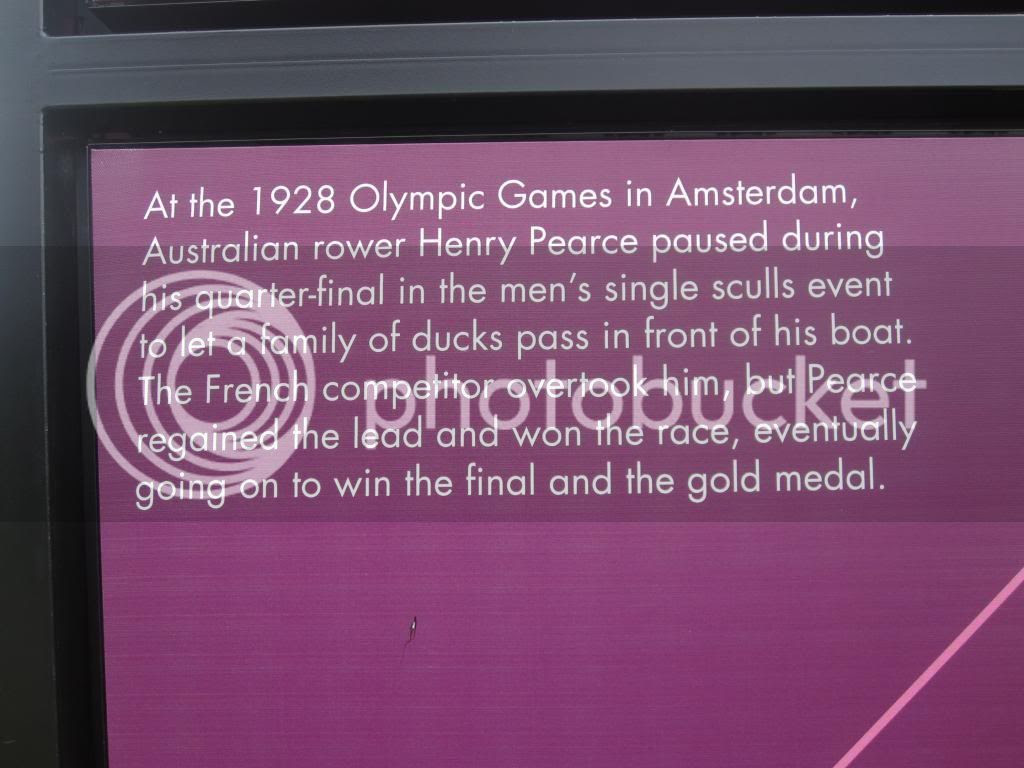 So... Julie Daniel sent me some photos to us in Just Add Light and Stir. This one would've have been legible at the small size I use for that blog, but I liked it, so I thought I should share it. Then I wondered what it's about. An act of kindness? Lack of dedication to one's nation? Sports! Conservation. Connections? Different readers will connect it to different things in their thoughts and lives.

I don't know where the sign exists (where Julie took the photo), and I don't know who loved the story enough to make sure money was spent on a sign that would be there a long time. Wikipedia says this, about that (and some other things):

Pearce won all of his races with relative ease. He defeated his first opponent Walter Flinsch of Germany by 12 lengths and his second opponent Danish rower Schwartz by 8 lengths. In the quarter final he was easily beating French opponent Saurin when a family of ducks strayed into his lane. Pearce momentarily stopped rowing to let the ducks pass; he still won by 20 lengths and broke the course record. In the semifinals, Pearce was pressed by David Collett of Great Britain, winning by three-quarters of a length (roughly 1.5 sec). In the finals he became the first Australian to win gold in the single sculls by defeating Kenneth Myers of the United States by 9.8 seconds. In winning he established a new Olympic record, some 25 seconds faster than the previous mark. This also earned him the Philadelphia Gold Cup, which represented the amateur champion of the world. He was awarded an Honorary Life Membership of the Sydney Rowing Club.

That was sweet, about the ducks. Had he lost the story would have a different tone. But he didn't have teammates to be angry about it; he was there alone. And he could've been even better prepared, but there were rules then that aren't now:

In preparation for the 1928 Olympics, Pearce attempted to enter the Diamond Sculls at the Henley Royal Regatta, but was barred as he was a carpenter by trade: the rule relating to amateur status then in force barred anyone "Who is or has been by trade or employment for wages a mechanic, artisan or labourer." This socially discriminatory wording was deleted in 1937.

One thing leads to another!
Posted by Sandra Dodd at 9:19 AM No comments: