I've brought something written when Holly was 12 years old

Holly has asked this week about "worthwhile" and "ruthlessness." She wanted to know what they meant and why they meant that.

Then yesterday we were watching an old Twilight Zone episode, Nightmare at 20,000 Feet (with William Shatner) and at the end Rod Serling intones a long speech Holly understood none of. We wound it back a couple of times for me to try to write it down for her. I missed a phrase, but we quit trying. In 1963 nobody could have wound it back or looked it up on google. One pass and probably most of the viewers said "what?"

But after I had it scribbled as well as I could in two passes, we were discussing these terms:
conviction
isolated
tangible manifestation (and then discussed "redundant")
"evidence of trespass"
and "so intangible a quarter as The Twilight Zone."

"Quarter" has a LOT of meanings, and a couple of them very intangible kinds of things!

When we were sitting down to watch Twilight Zone, Holly had to move the Tank Girl comic books she had been reading. One was called "The Odyssey." Then the DVD menu came up, and one of the episodes is called "The Odyssey of Flight 33." I was in the next room and she yelled to tell me about that, and I said "You saw the word 'odyssey' twice in an hour? Cool!"

"I saw the word 'odyssey' twice in one MINUTE!
What IS an odyssey?"

I told her it was a long adventurous trip, often unplanned. Reminded her of Jason, fleece/argonauts, and she said "and next comes the saga?"

She's right. Mixing languages and cultures, except where they meet in English.

That's a lot of vocabulary and history tie-in to come in the small space between the 1990s' Tank Girl comics and some late 50's/early 60's Twilight Zone on a Wednesday night, and it wasn't anything I could have planned, but I was happy to go with it when Holly brought it up.

Now, years later, technology makes explorations and connections even easier.
Some people might be able to see the episode here: http://www.hulu.com/watch/440824

But it's not any one TV program or book or film that helps. It's a quantity of various things, and having a mind that is not closed down with fear, shame, self-conscious, so that connections will come easily and joyously.

If one wanted to continue down this 20,000 foot path, though, here is something on NIGHTMARE AT 20,000 FEET & EPISTEMOLOGY — a transcript of a podcast called The Sci Phi show. "Epistemology" is a pilosophical term referring to how and why we believe and know what we think we know. That episode is thick with material for those thoughts. Seeing, thinking, expression, reflection.

Posted by Sandra Dodd at 1:37 PM No comments:

Once when playing Writey Drawey, a lake and a wombat turned into a gerbil and a burrito, and then a guinea pig and a burrito. Nice! 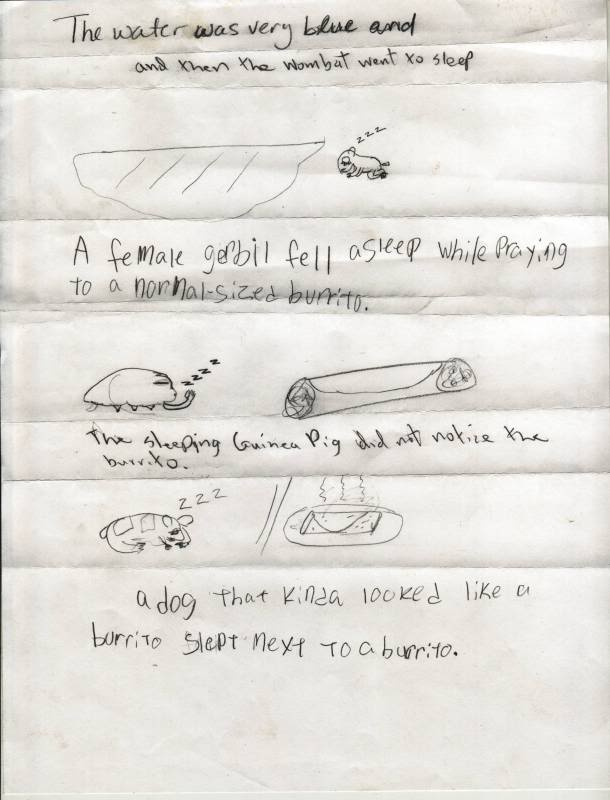 Today someone posted this on Hallie Kasiri's facebook page:


I used to make one-drop pancakes for Holly's pet rats.
We have given tiny watermelon slices to prairie dogs.
Same effect—they hold them and look SO CUTE!
Posted by Sandra Dodd at 8:02 AM No comments: