"Tractor" (the word, the thing)

This morning my mind wandered through the events of the day, a coming road trip, and the literal meaning of the word "tractor." I had never thought of it. Traction. Retract. A tractor is a thing that pulls!

The thing it most basically pulls is a plow, that tool said to have so profoundly advanced human culture.

I wondered then whether anyone (maybe Icelanders) called them "iron oxen" or "power plows" or anything more Germanic. So I started poking around.

That came up, when I tried to see what "tractor" was called in other languages. It's not tractor, but I was excited to see that in Italian, "carro" is something pulled by animal traction (which fit right in, and also gave me a good clue why we called our automobiles "cars." In English a "cart" is pulled by animals, but people didn't so often ride in them as they do "wagons" or "carriages."

High-power, low-speed traction vehicle. The two main types are wheeled and continuous-track. Most modern tractors are powered by internal-combustion engines running on gasoline or diesel fuel. Tractors are used in agriculture, construction, and road building, for pulling equipment such as plows and cultivators, for pushing implements such as bulldozers and diggers, and for operating stationary devices such as saws and winches. The first tractors grew out of the steam engines used on farms in the late 19th century; in 1892 an Iowa blacksmith, John Froehlich, built the first farm vehicle powered by a gasoline engine. The tractor revolutionized farming, displacing draft animals and many farm workers. By World War I the tractor inspired the tanks built by the British and French.


I saw some steam tractors at an outdoor museum called Hollycombe Steam in the Country last summer. 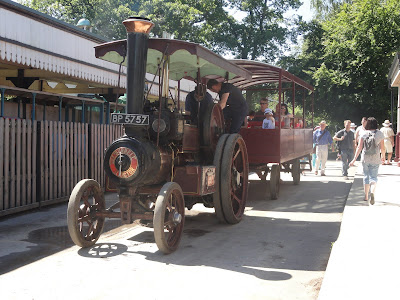 Posted by Sandra Dodd at 9:21 AM No comments:

Four of five have real trunk-looking trunks, and this is about the end of that era. 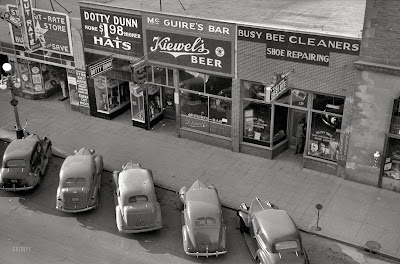 From the Shorpy blog: http://www.shorpy.com/node/11699?size=_original

I wondered whether maybe in carriages, pre-automobile, there was a box for the driver to keep things in. I don't know, but if anyone does know, please leave a note!

Wikipedia has an article on glove compartments. There's more, but I liked this part best:

A glove compartment is occasionally referred to as a "jockey box," especially in the U.S. Upper Rocky Mountain states such as Idaho and Montana, but is found as far south as Texas. In South Africa, it is called a "cubby-hole". In Turkey, it is called "Torpedo Compartment".

According to the BBC Four programme "Penelope Keith and the Fast Lady" it was Dorothy Levitt who first coined the phrase 'glove compartment' as she advised motorists to carry a number of pairs of gloves to deal with many eventualities.