The Library at Alexandria, and RCA Victor

Twice in two days someone said, in my house, "The Library at Alexandria." One was me, to Keith, in a conversation about how bad I should feel if I decide to dump all my 36 years' worth of saved papers and artifacts from the local and regional history of the Society for Creative Anachronism. Oh... I have stuff from five years before I joined, too, given to me by people who wanted to dump their collections, and knew I had one.

The next day, a friend was over talking to Marty and me and mentioned the mystery of what might've been in that library.

In the course of a long conversationa bout saved things, and lost things, I mentioned the Wayback Machine at the Internet Archives. Neither Marty nor Bo knew about it. I use it frequently.

Today, planning to send them a link to it, I was in looking to see where it's backed up, because we had talked about that, too. When I first knew about the Internet Archive, I read that it was at The Prisidio, in San Francisco, which doesn't seem geographically stable. I guessed that it might be backed up in Bouler or some high-plateau sort of facility. I was in there reading about the history of the Internet Archives and some courtroom commentary and uses, and saw, at the bottom, a link to the Official mirror of the Wayback Machine at the Bibliotheca Alexandrina . Huh!

Then I looked up the Bibliotheca Alexandrina and found that it's a real (and really big) place, built as close as they could figure or get to where the original library was. That seems like as bad an idea as storing the internet archives in San Francisco, which seems prone to fire, earthquake, mudslide and maybe tsunami. Being on a historic military compound won't save them from any of that. 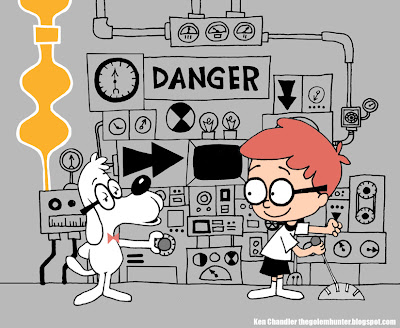 So the backup is where the LAST Alexandrian library sank into the swamp! Mediterranean! Or burned. Or gradually declined. But I had already read, by then, that there was a backup at Sun Microsystems in Santa Clara, or that that's where it all lives now, maybe.

The Wayback Machine is named after one on Rocky and Bullwinkle that sounded like that, but looked like WABAC. Rocky and Bullwinkle didn't time travel; they weren't in those segments. A boy named Sherman would be taken into history by Mr. Peabody, a dog. I found a list of their destinations, and was sad to see they didn't travel to the Library at Alexandria. They did visit Cleopatra. Amazon Prime will show that and two other adventures here, free with Amazon Prime, $1.99 otherwise, and probably unavailable to some portion of humans on earth, in 2013.

Meanwhile, back in Egypt, tile art found while they were excavating to build the new library:

I know what the second dog is looking at, and listening to. WHAT is that gold mouse-hotel-looking thing the top dog is posed with? Another thing mentioned last night is how long gold lasts. In a fairly recent conversation with Will Geusz, we were talking about how long tile lasts, if you don't drop it and break it, because an artist has put some of my words on tile plaques (here).

Here's an image from a better angle, with explanation:
A Beautiful Mosaic in the New Library of Alexandria

So here's what I intended to send to Bo and Marty. The oldest stored version of my unschooling web page: http://expage.com/RadicalUnschooling. Marty was 11. He's 24 now.

Here's the page that hosts the Wayback Machine: archive.org

And in a related topic, also at the Internet Archive, people can upload sound files, and many of my conference presentations are there (if you search Sandra Dodd and maybe add unschooling). http://archive.org/details/BigNoisyPeace

Posted by Sandra Dodd at 5:31 PM No comments:

Sheep to bus to play to Singapore to movie

You might need to click an "I agree" box to see it, but the site seems safe and stable.

The play, which had a character who was obsessed with films, was made into a silent movie in 1926. http://newspapers.nl.sg/Digitised/Article/straitstimes19310330.2.9.aspx I googled "The Unfair Sex" and 1923, and found a newspaper article describing a production of the play in 1931, but it mentions ..."'The Unfair Sex,' the Savoy Theatre Success of 1925..." (You might need to click an "I agree" box to see it, but the site seems safe and stable.) 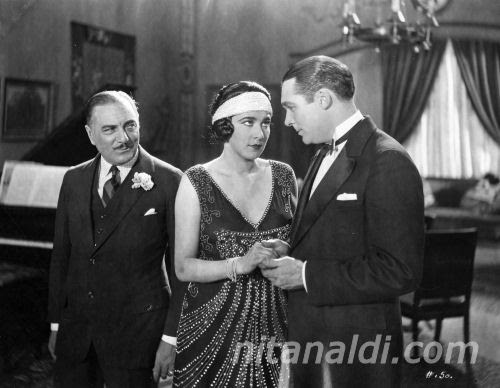 Nita Naldi was one of the stars. Someone has created a web presence for her (her photo is on IMDB, and there's a beautiful website).

I could have kept following trails. Some of that will stay in my mind, though, and the idea that something from the 1920's could have such a web presence says something interesting about the progress of the internet.

Put things online! Add to our shared wealth of information.

Posted by Sandra Dodd at 6:36 AM No comments: