"Heilige Schutzengel" might be the most commonly known version of the motif of the Guardian Angel, and it's from Germany in the late 19th century, but the history of these images hasn't yet been tracked well. There are many versions, and I saw a new one in the grocery store this week: 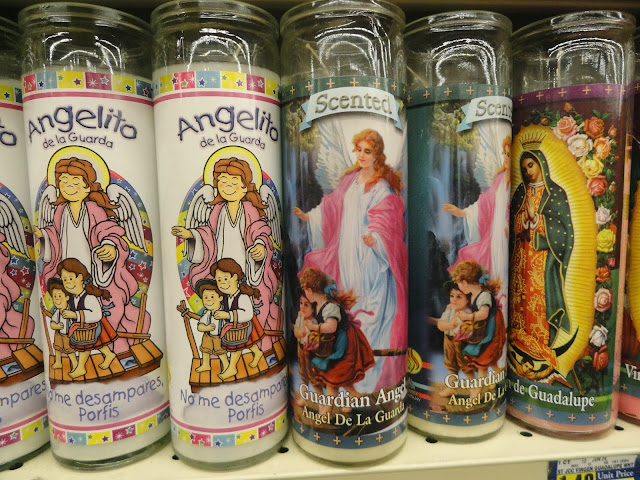 There are many variations—older boy, younger girl, different bridges, different hair and coloring on the angel—but there is usually a broken bridge, water, darkness and trees.

This cartoon version has a touch of water and a rock showing through the hole in the bridge, but behind the angel is a cloth of stars, suggestive of Our Lady of Guadalupe with her starry cloak.

I think the older versions are comforting for parents. This new one is kid-friendly, not so scary. The kids are still in the German clothes, with the basket, with the red napkin, but the scary storm and waterfall are darkness are all gone.

This is marked in wikipedia as having been a German postcard from 1900. The candle in the center above is very similar, but has a higher waterfall, and more colorful clothing. 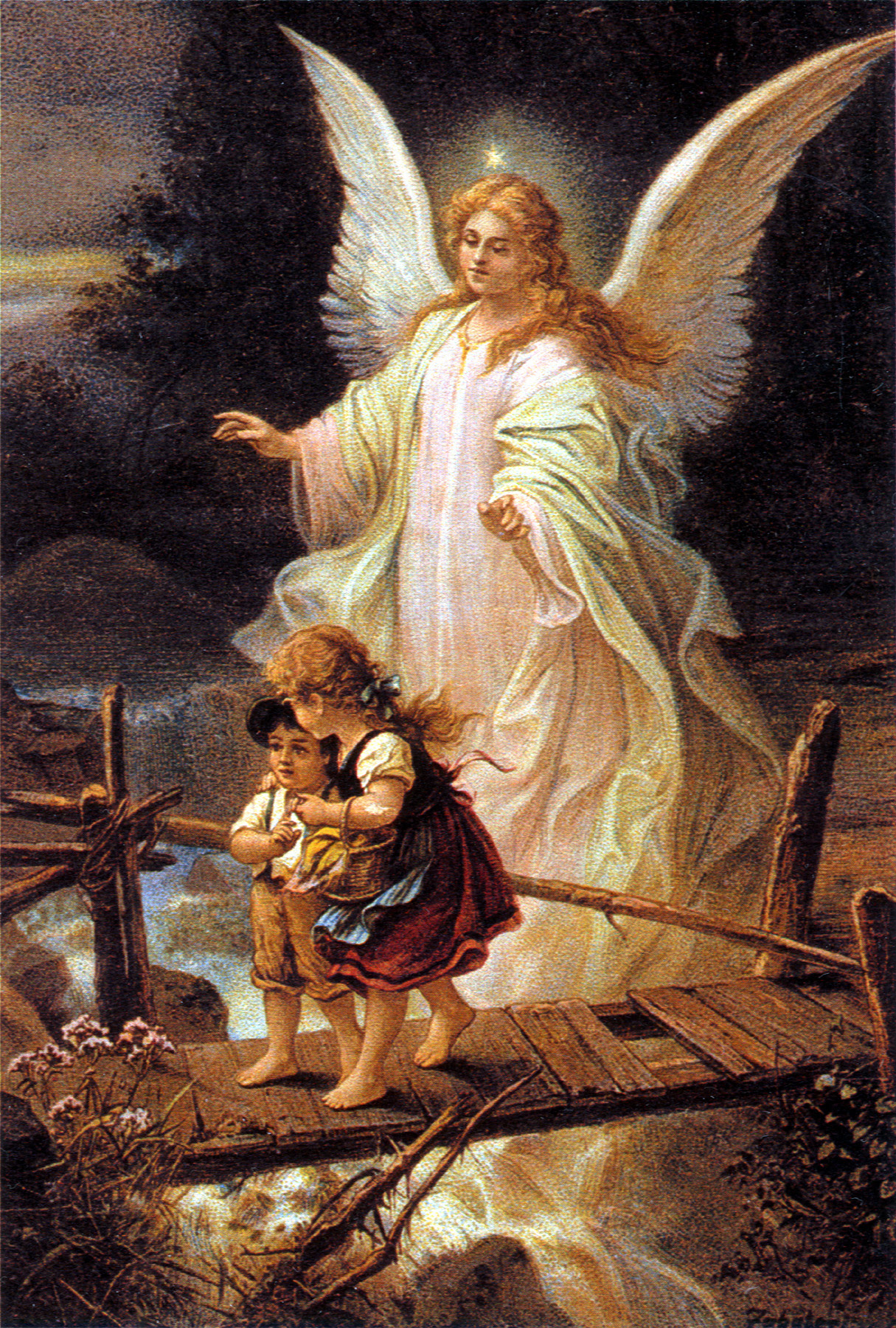 The star above the angel's head is in many of the variants. It creates a sort of halo. Most of the art I've seen is of the permutation above—movement toward the left, two children, broken bridge. Below is one that has bridge (solid, but no handrail), waterfall, star over the angel, but the costumes are more classical—the angel's is the art deco style Greek/Roman (some art historian should feel free to leave a clarifying note), and the child has the scrip and staff of a medieval pilgrim. Barefoot, as matches the tradition of the child on the bridge, but the bag and walking stick don't suggest "on the way home" so much as being on a journey. 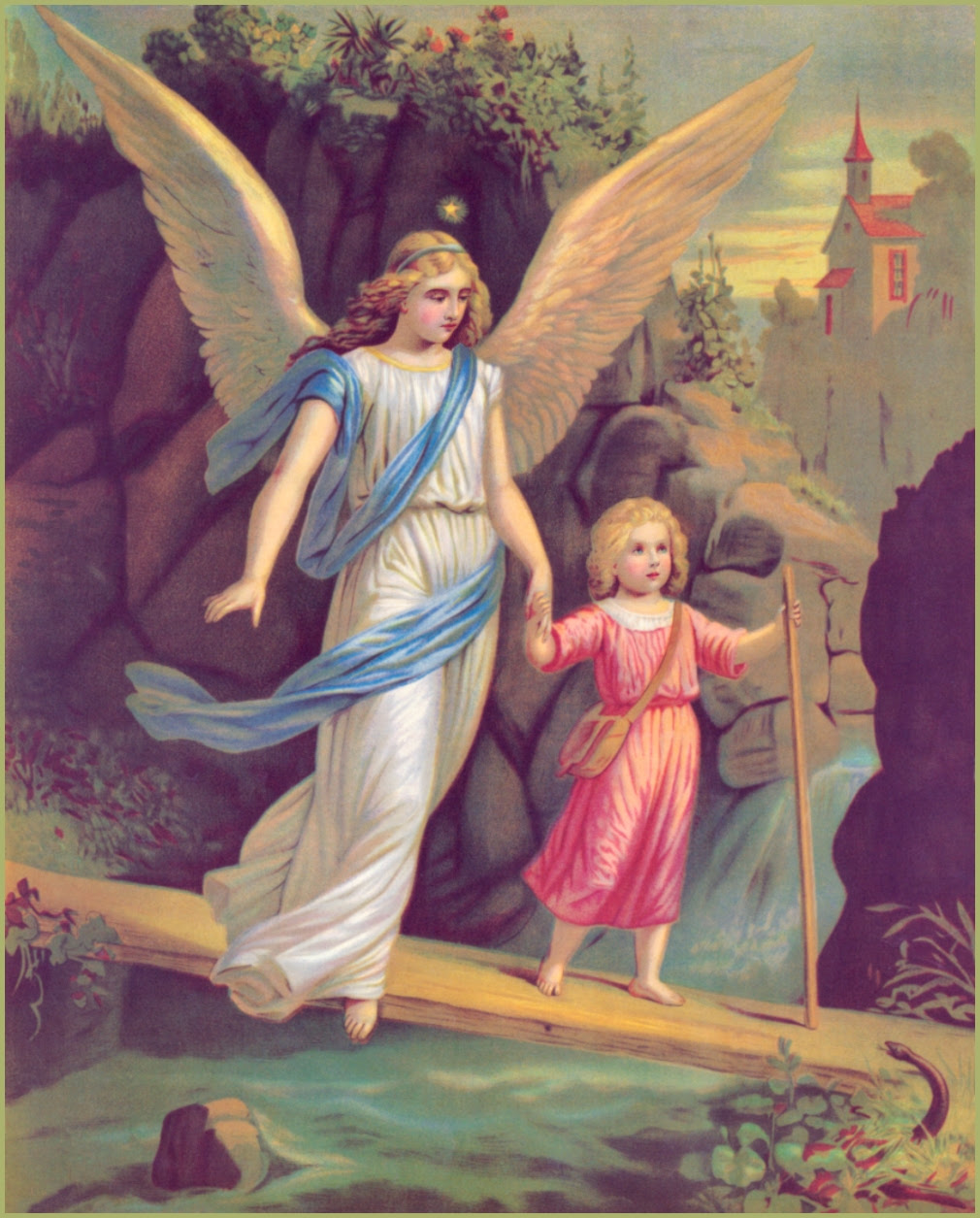 If the building up the valley is a school, maybe the bag is lunch.

I think it's a church, though, by the spire and window. This one is not "right," by guardian-angel-art standards, but it does have long red hair and a star above the angel.

In a box at my house, I have a collection of years worth of guardian angel art picked up to save to compare. Maybe I'll scan or photograph some of it and bring it here, so I've put tags on this post for future connections.

To google for more images, you could try these in addition to "guardian angel art"—Heilige Schutzengel or Angelito de la Guarda. "Angelito" doesn't mean the angel is male, because (I believe) angels are non-sexual, non-gender creatures, and the noun is masculine.