Last month, I was at the Phoenix airport and took a photo of the exit from the parking lot. It's a big one. Minneapolis/St. Paul airport has one, and my kids liked it when they were little. They called it the swirly hurly. Perhaps that's a common name for a kind of sick-making spiral road. 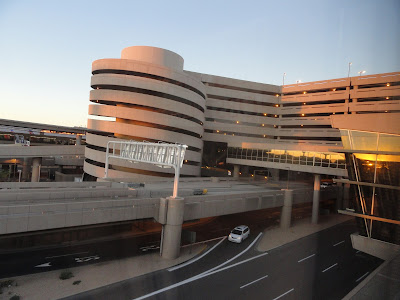 BUT…. those roads? Always just one-way. Down.

Then I saw this: 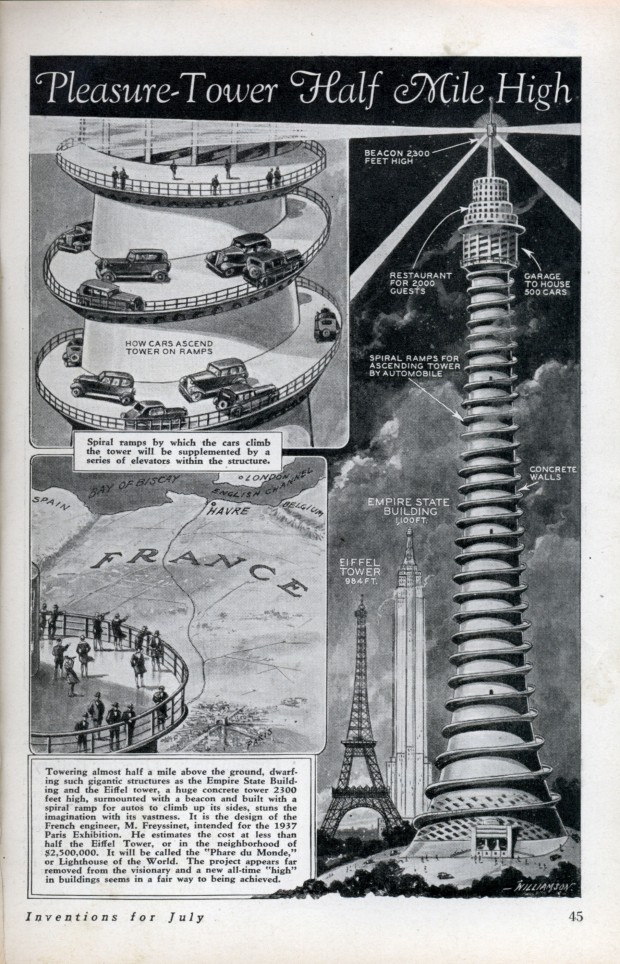 Proposed Pleasure Tower, 1937 Paris Exposition
If you click the link above, you can see some details—Restaurant for 2000 guests. Garage to house 500 cars. Beacon 2,300 feet high.

Even the artist couldn't get enough space on that road. Check the upper left, car coming up. And they're going into that big parking

What kind of easy suicide tower is that for the pedestrians who took the elevator up, or those on the platform who might've come out of autos. I just don't like it. It spooks me even that someone thought about it and drew it and published it, as though there was anything around it that was a good idea. 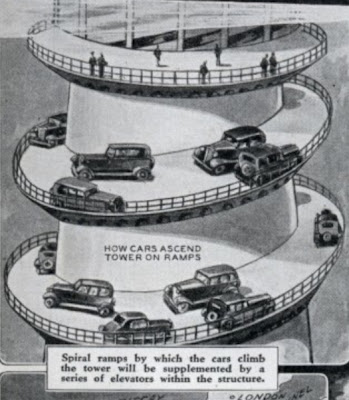 Maybe my instincts changed when I became a mother.

Scary stories of the Christian Cults

I find myself without a good place to save or express this. I've been reading this morning about HSLDA, politics (rare for me) and Christianity (not rare, but this was a rare set of readings).

I DID NOT KNOW that there are churches treating young adults as children.

I DID NOT KNOW that there were churches that tell children (of 20 years old) that they are not allowed to speak to their parents about a topic, or that would "forbid" a parent to talk to his or her own child (adult child). I am SHOCKED that there were adults (of 20 or 45 years) who would agree to such a crazy-ass condition.

*He commanded that no one talk about the incident in which they were personally involved and affected by, preventing parents from investigating the truth of their own kids’ actions and involvement. All were expected to accept his solitary findings without question. It is not “gossip” or “sowing discord” to discuss or even argue about actions in which one is personally involved.

Homeschooled families. Families homeschooling because they had been persuaded it was a sin not to. The quote is from the Baptist Taliban blog, but an unschooling mom who was once a Christian school-at-home mom in a church they left after many years of deep involvement.

Exploring, today, I also came to a list of blogs

This page began as a listing of bloggers who grew up in and were affected by the Christian Patriarchy and Quiverfull movements—which is best captured in a loose array of leaders and organizations, including Bill Gothard and ATI, Dough Phillips and Vision Forum, Doug Wilson, Michael and Debi Pearl, Joshua, Alex, and Brett Harris, and Michael Pearl—but it has since expanded.

One had an account of courtship, in which parents were controlling young-adult children to a frightening degree, and it was acceptable to all four parents, and agreed to by the couple (now married, but once forbidden to be in the same place or to communicate in any way).

I've put these here because I wanted to be able to find them again. I don't want to disturb unschooling discussions with them (and it would be off topic). If I put it on my personal blog, someone is tweeting every post, marking it "unschooling." This is not. I don't want them anywhere near Always Learning or Just Add Light and Stir, both of which are dedicated to peace and joy. These things are far from either of those, except in the fact that people are leaving oppressive, abusive situations. But the descriptions of why, and even the tone of some of the current posts, is broken, dark, and sad. People recovering from fundamentalism might not have enough years to recover in a long lifetime.

I've always known there were big bad things in and among the homeschooling families on that edge of reality, but I've seen worse today than I knew before. I had read years ago about families not letting kids play with other kids whose parents didn't believe exactly as they did about doctrinal details. Today I read about a minister who encouraged sports, but only against other teams of the same doctrinal beliefs. I read about men being told to keep their wives off the internet because women gossip 24/7 and will do damage to [churches? fundamentalism?].

Years ago I was asked how, if I didn't believe in hell, would my children learn to be moral. Or how I would teach them to be kind an honest if we didn't have Jesus, or something like that. EASILY!! Very easily. Make it about the kind of people they want to be, and the feelings of other people. Easy. And they ARE moral people, and kind, and nice.

Partly it came up from anti-Halloween joking, and something about demon-possessed Halloween candy. That was funny, if the tip of an iceberg of horror can be funny.

"I do not buy candy during the Halloween season. Curses are sent through the tricks and treats of the innocent, whether they get it by going door to door or by purchasing it from the local grocery store. The demons cannot tell the difference."

Damn it, demons. Keep your demonic cooties out of the treats of the innocent.

Now perhaps this is part of the ravings of a mad woman possessed by imaginary angels. And perhaps I'm misusing the word "perhaps." But nobody fabricated that quote to make fundamentalist Christians look bad. (Why Celebrating Halloween Is Dangerous) Even the counter-opinion pro-Halloween-for-Christian-kids article is based on thinking that the claims of scaredy-Christians and neo-pagans are true about the dark and dangerous alleged history of Halloween.

But still... claiming that the candy itself is cursed is FUNNY! What a waste of emotion and belief, to see evil everywhere.

On Why Celebrating Halloween Is Dangerous, quoted up above, the site has put a disclaimer, that it's a controversial topic,and those are the views of the author. They probably did it because several people commented on that and linked to it at the time. I only quoted the kid-friendly parts. She goes on to some REALLY wild claims.


Other commentary on her article:

Witches Put Demons In Halloween Candy? More Could Believe That’s True Than You Might Think. (Center for Inquiry)

Demons Get Busy in the Vortexes of Hell (The Atlantic)