I'm interested in lyrics and poems that use all "original English" words--Germanic/Anglo-Saxon words. Without looking deeply into this, it seems to be one. On one pass, I think maybe "pay" and "turn" are from French, but they're from French a thousand years ago, so that's not bad.

Sunshine go away today
I don't feel much like dancin'
Some man's gone he's tried to run my life
He don't know what he's askin'
When he tells me I better get in line
I can't hear what he's sayin'
When I grow up, I'm gonna make it mine
These ain't dues I been payin'

Sunshine, go away today
I don't feel much like dancin'
Some man's gone he's tried to run my life
He don't know what he's askin'
Working starts to make me wonder where
Fruits of what I do are goin'
When he says in love and war all is fair
He's got cards he ain't showin'

Sunshine, come on back another day
I promise you I'll be singin'
This old world, she's gonna turn around
Brand new bells will be ringin'

One image I have in my head of how this kind of parenting works is like a hand pump. Some of you might never have used a hand pump on a well, but if it's been sitting a while or the well is deep you might pump this big long handle down and up several times, and nothing happens, but finally you hear the water and then it floods out, more water than you needed. Then the next pump can be controlled because there's water in the pipe already, and it takes just the lightest touch.

Or similarly, siphoning liquid with a short hose, where the beginning is scary and creepy and doesn't seem at all like it would work, but once it's flowing, you don't have to do anything except make sure the end of the hose is below the level of the weight of the water or whatever it is.

Learning and growth are like a limitless reservoir, but we have factors in our culture that limit our access or control or faith that it could even work, or our feeling of ownership of knowledge of growth and learning. Experts. Timetables and charts.

Just in case it would help anyone else to think of it as the flow of water but siphons and hand pumps are unfamiliar, here are some pictures (and they're just interesting anyway):

The one on the left is from Bison Pumps (in Maine). It's a modern version of the cast iron pumps I knew from the mid-20th century (center photo). On the right is a pump from Finland. They're manufacturing pumps in Ghana and Tanzania too. 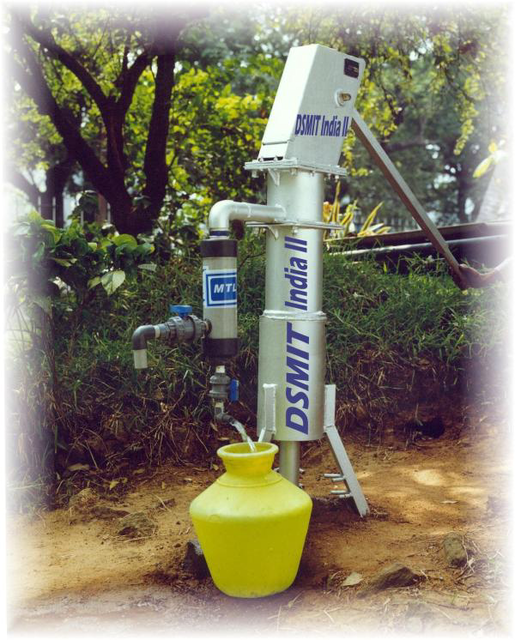 added in March 2009, another photo of those water jugs from India. Click it to go to its source (other photos of India): 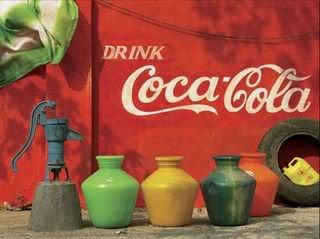 Thinking about this, though, our current plastic gallon "milk jugs" are based on pottery or glass bottles, only made squarish so they can be packed in safely and tightly for transport. Here's a combo, then: older pump on a forest service site, and people filling up modern "milk jugs" (in New Mexico or Colorado, early 21st century): 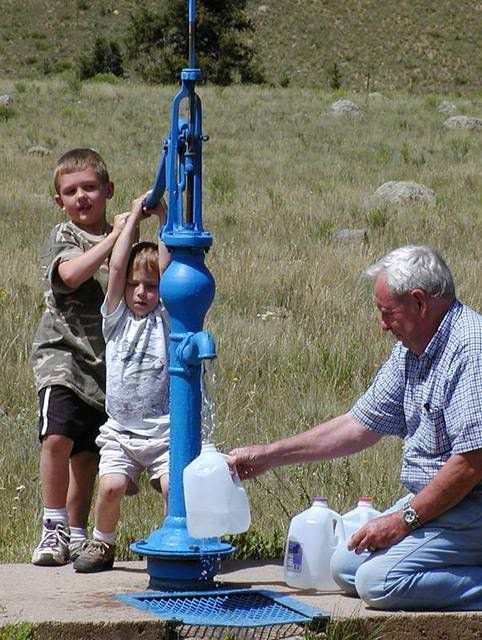 Siphoning used to be common for moving gasoline. Gross. I've seen my dad do it many times. In the 70's when gasoline prices went up, people would steal gasoline from cars. Before that, I never saw a locking gas cap. They sold metal springs (like a funnel of coiled wire) to mount inside gas tanks so a siphon hose couldn't be inserted, too.

I never thought of siphoning gasoline again until this week. We have a conversion van we've used for out of town trips. I went with Keith to Costco, the least expensive gasoline in town, and we put $102 worth of gasoline in there. Then a few days later, it wouldn't start and it's in the shop. I'm thinking "We need to get that gasoline back out of there!"

If we were to decide to do that, though, I would try to rig something with the shop vac. (Ah... there are all kinds of hand-squeeze and small-pump plastic siphons for doing this now.)
Posted by Sandra Dodd at 6:48 AM 3 comments: